Well, we did it! After a hugely successful Kickstarter campaign to raise enough money to launch five new designs, replenish the stock of all of our old designs to a level they've never been, and offer every single design in black; we packed up more than 1700 shirts in a trailer and went to the Los Angeles convention center this last weekend, and exhibited at our first Comic-con ever, WonderCon 2016!

The Cotton Crustacean booth at WonderCon 2016!

So, how was it!? Well, it was A LOT of fun, and a TON of work, of course. We pulled out all the stops on our booth, getting it closer than ever to a true pop-up shop boutique that invites people to come in and get up close to our designs. This also meant a lot more to set up, load in, and load out. But we feel it was worth it!

Rock walls, end-caps with framed prints, lots of new banners, and of course the new designs from Kickstarter. We really went all out for WonderCon, which also means our booth will be dialed for every show here after.

Take a quick tour of our booth in the video above.

Did we make a million bucks!? Sales were solid and steady, but... in all honesty, no where near what we were hoping for. We have done much better at larger arts and craft shows in the Bay Area. Which begs the question; were we wrong about a comic-con audience being excited about REAL prehistoric sea-life?

We sold somewhere around 150 shirts and a couple dozen prints.

That's nothing to scoff at. In actuality, that's pretty huge, especially for our first truly out of town show where we don't have the local company advantage, and where most of the attendees are looking for a much different type of product than prehistoric marine life t-shirts.

Did it warrant the enormous investment we made in inventory and travel expenses? Meh, probably not. At this rate we sold about 10% of the stock we brought. After expenses specific to the show; like booth fee, hotel, travel, parking, trailer rental, food, etc... there wasn't a lot left over. It's certainly not the outcome we were expecting. As some may recall from our Kickstarter video, we thought that a show claiming 60,000 people in attendance would produce exponentially more sales than our usual small arts and craft shows.

We eventually flipped these shelves to face the aisles, drawing more people in.

After talking to a large variety of vendors, from some of the biggest name comic-book publishers, to sellers of vintage toys and even some other t-shirt vendors, the general verdict was that is was a remarkably slow show in regards to sales. Lots of people came through the convention center doors, few left with things they bought on the convention floor. Pretty much everyone I talked to said this.

Reasons given for this were many. The show fell on Easter weekend. Ugh. That certainly wasn't going to help. Also, it was the first time the show was in Los Angeles, having been in Anaheim for quite a while since it was moved from San Francisco. You'd think this would translate into increased excitement, but most vendors agree that LA is a hard town for trade shows. Lots of people show up, but generally don't buy much. The cosplayers were out in force, with some of the best costumes I've seen at a convention, but it certainly felt like large portions of the crowd were there to see and be seen, not necessarily buy stuff.

As promised in our Kickstarter campaign, I donned the Aquaman outfit for Sunday.

Would we do it again?

Hmmmm... yes. But differently. I still feel there is a place for us at these types of shows, just maybe not a 10x10' sized place. Even though many people would walk into our booth and let loose a sigh of relief, "Hey, real things! Not Star Wars action figures." I feel like we could have that same effect with a smaller (and thus cheaper) booth and table, and less than half of our inventory. Because, while I heard I heard more than once people walk by and go, "Crustaceans?! What the hell are they doing here?" those who were excited to see us there were REALLY excited to see us.

Also, the show returns to Anaheim next year, where it has been wildly successful.

So yeah, I'd personally do it again, as a huge fan of comic conventions, and a firm believer that among the thousands of people in attendance at a comic-con, there will be at least hundreds of people there deeply excited by real life science, biology, paleontology, and even geology. Reality is stranger than fiction, and the fact that we are exposing people to sea monsters and other strange critters that once actually existed, was something a LOT of people appreciated after being bombarded by the usual comic-con fare of toys, comics, and mash-up swag.

Two of the new designs from Kickstarter, the Edestus (left) and Shonisaurus (middle).

After all is said and done, we made our show expenses back and then some, had a really fun time, met lots of new fans, became friends with some great vendors around us, and got a lot of our shirts into the hands of people in Southern California. And, thanks to everyone's incredible support with our Kickstarter, we now have so much inventory going into the arts/crafts/gift show season, that we won't need to reorder much of anything for a long time to come. Speaking of which, next up... Treasure Island Flea, SF, April 23rd-24th; Urban Air Market SF - Hayes Valley neighborhood May 1st; and Makers Faire in San Mateo May 20th - 22nd. Thanks to everyone to came and supported us at WonderCon. Enjoy your shirts, and if at all possible, we'll be back next year with lots of new stuff!

Illustrating the latest opus by Dr. Helen Scales - EYE OF THE SHOAL

SPIRALS in TIME is in STORES! 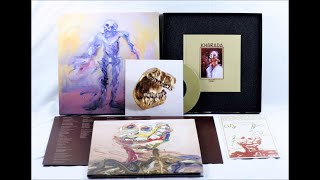